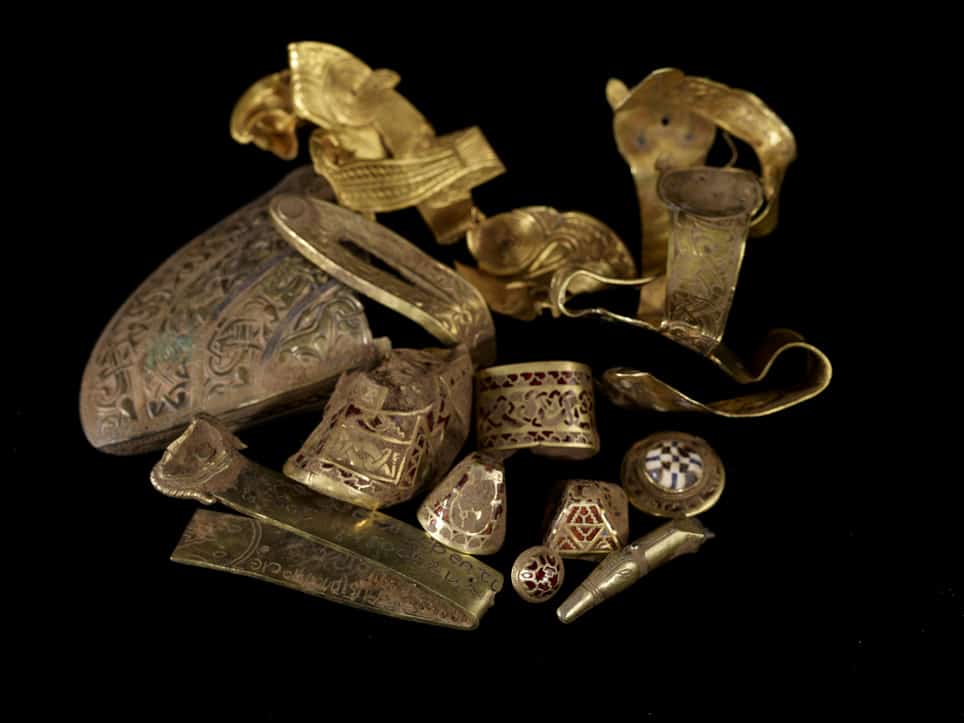 We all dream of it. Sweeping that metal detector over a sandy patch of the shore, only to unearth a massive gold nugget that changes your life forever.

Well, reading about the best metal detecting finds shows that anything is possible, and every discovery on our list would have started as the thing of dreams.

We’re going to take a look at how they came true, and look at the best and most famous metal detecting finds in history.

The USA boasts an impressive community of metal detectorists, so it is no surprise that many of the worlds’ most valuable finds originate from this area.

You know a nugget is big when it ends up in a museum. Discovered in California in 1977 by prospector Ty Paulsen, it was donated to the Natural History Museum of LA County.

The Mojave Nugget was found in the Stringer District near Randburg and weighed a massive 156 troy ounces. This is approximately 4.9 kg and is considered one of the most valuable metal detecting finds of North America.

Upon a visit to an island near Nova Scotia in 1952, Edward Rowe Snow discovered a haurd so sizable, it is what many detectorists dream of – eight Spanish doubloons that dated back to the 18th Century.

A doubloon was worth around $4 (four Spanish dollars) and to make this discovery more interesting it was found with a skeleton, with some of the doubloons still within its grasp.

Searching the waters around Key West in 2008, Mike DeMar found a gold chalice that turned out to be 385 years old.

It was from the Spanish ship the Santa Margarita which was wrecked in 1622, sinking with enough treasure to send detectorists giddy.

DeMar was later the recipient of a $1 million reward for the discovery – not bad for a day’s work!

An island teeming with amateur and professional detectorists, Britain has been the venue for a variety of significant finds:

More than just a significant find in terms of monetary value, the Staffordshire hoard lived up to its name.

They were discovered in a field near Lichfield, England in 2009 and are heralded for the exceptional quality of the workmanship and were purchased for £3.285 million by the Birmingham Museum and Art Gallery and the Potteries Museum & Art Gallery.

It is rare to find complete necklaces from the iron age, which is why this gold alloy torc dated between 250 and 50 BC is such a find. Discovered by a detectorist near Newark-On-Trent, England in 2005, it weighs 1.5 lbs (700 grams) and was likely to be made in Newark.

Because it was found buried in a pit, it is believed to be a horde with many speculating as to why it was disposed of in this way.

Found by tree surgeon turned amateur metal detectorist Maurice Richardson, it shows that anyone can unearth an item that is thought to be one of the most significant finds of its kind in the last 50 years.

If you have metal detected on the beach or in a field for long enough, you are likely to have been excited by the discovery of a coin or two, most likely something still in use and not so exciting.

So, imagine James Hawkesworth’s heart racing when he found 670 Roman coins and 72 pieces of hack silver in Somerset, England in 2001.

The treasure, valued at over £40,000 was acquired by the Somerset Country Museum where it is now displayed at Taunton Castle.

Found in September 2000 by Michael Rutland and Gordon Heritage who were metal detecting, this bronze age hoard of gold was discovered in a field near Milton Keynes, England. It was made up of two torcs, three bracelets, and some bronze rod which was stashed in a pot.

The two men who found the hoard were awarded 60% of the value although the landowner tried to dispute their legitimacy as they had searched the land without permission. This serves as a lesson to all detectorists – get your permissions before getting started.

Britain loves a good bronze discovery, and few are more eye-catching than the Roman Cavalry helmet found in Cumbria in May 2010.

It was later found that a Romano-British farming settlement had resided near the site, leading to assumptions that the helmet belonged to a member of the Roman Cavalry who lived nearby.

It has been dated to the late 2nd or 3rd century AD and was unearthed by an unnamed metal detectorist. The man, who was in his 20’s at the time, had only found a handful of Roman coins before this, showing that if you stick to it, anything is possible.

The helmet and visor were buried together 10 inches below the surface and were sold at auction in October 2010 at Christie’s for £2.3 million to a private buyer.

A significant Iron Age finds in Stirling, Scotland, was unearthed by a metal detectorist David Booth, trying his luck for the first time in a field in 2009.

Booth may have used a basic metal detector but had managed to gain the landowner’s permission before searching the area.

For an amateur, he certainly learned about good practices quickly as he took the torcs home and washed them before contacting the Scottish Treasure Trove via their website with photos of his find. Imagine their surprise the next morning when they opened the images!

It has since been called Scotland’s most significant discovery of Iron Age metalwork and made up of four gold iron torcs dated 300 to 100 BC. They were thought to be buried in antiquity and valued at £462,000.

This sizable hoard was found in 2005 in Berwick Upon Tweed, England by metal detectorist John Minns. To keep the find location a secret, the hoard was named after his daughter.

Included were six gold rings, bracelets, pins, and six socket axes thought to be used as weapons for woodworking.

They are currently in the Great North Museum, Newcastle Upon Tyne.

What Is The Most Valuable Find With A Metal Detector?

There are few finds unearthed with the use of a metal detector that can match up to the Hand of Faith. When Kevin Hillier was swinging his detector near Kingower, Australia in 1980, he would have had no idea that he was about to dig up a 960 oz (27.2 kg) gold nugget.

It was sold six months later to the Gold Nugget Casino in Las Vegas for $1 million which would be worth close to triple in today’s money.

In the Sonoran Desert, Mexico, a cheap metal detector was used to find a 389 oz nugget known as the Boot of Cortez which sold for $1.55 million in 2008.

Over in Ireland, the Derrynaflan Hoard was discovered by father and son Michael Webb and Micahel Junior in 1980.

They dug up a large corroded metal basin and soon realized they had discovered a full set of communion vessels, that would later be dated the 8th or 9th century. The significance of the find saw it valued at 5.5 million Irish pounds at the time or $15 million in today’s money, but the father and son duo only received 50,000 Irish pounds as the landowner had not permitted them to dig on their land.

The variety of these finds shows that you only have to swing your metal detector over the right place to have a chance of finding a life-changing discovery. With luck on your side, you may be able to discover a hoard of historical significance.

Even if you find an old coin or two, the rush of anticipation is hard to replicate.

MetalDetectingintheUSA.com does not publish sponsored reviews; however we may earn a commission when you purchase something using one of our links. This includes, among others, the Amazon Associates Program for which, as an Amazon Associate, we earn from qualifying purchases. Our reviews are unbiased, and our opinions are our own.