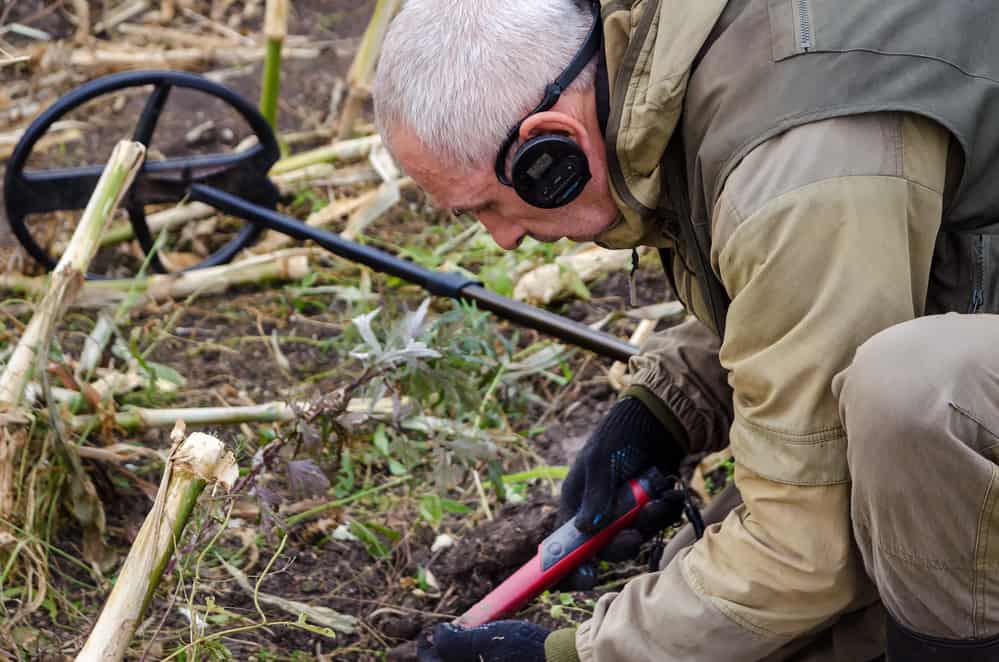 What’s the difference between a metal detector and a pinpointer?

Though the basic purpose of a full-size detector and a pinpointer are the same, they are used in very different ways. A standard detector is designed to be swung back and forth over the ground to detect targets both on the surface and at depth, whereas a pinpointer is intended for use after you’ve found your target, dug your hole, and now need to locate it within the hole.

On top of this, one of the very useful features of all modern detectors is discrimination. Generally, pinpointers are unable to discriminate between ferrous and non-ferrous targets. Experienced users will be familiar with pulling nail after rusty nail out of a hole before retrieving the target you were searching for in the first place. Due to their small size, pinpointers also don’t have anything like the search coil that comes with even a very inexpensive detector and as a result, they can only search a very limited area. In short, a metal detector’s features are geared toward searching a large area, while a pinpointer’s design is for just that – pinpointing a target’s location after it’s been identified by your detector.

Do you need a Pinpointer for metal detecting?

Need? No. But will anyone serious about the hobby want one? Yes.

Detectorists mostly did without pinpointers for decades, though there were some early, primitive, pinpointer-like devices around as early as the 1970s. It is eminently possible to find your targets without using a pinpointer and there are techniques that can help you do this more efficiently, but they are certainly less efficient than using a pinpointer. For those who are just getting their feet wet in the hobby, it may be wise to hold off purchasing a pinpointer until you’re sure that you enjoy metal detecting. But if you’ve been bitten by the bug or don’t mind a little extra expense, a pinpointer should be on your Christmas list.

How do you use a pinpointer?

Another way a pinpointer can be used is specifically for shallow targets. Once you have located a shallow target you intend to dig, you can use your pinpointer to find the exact location of the target from the surface before you dig. Getting such a precise location for your target prior to digging can help you cut a smaller and neater plug, which can be an important consideration when detecting private yards or public parks.

How deep can a pinpointer detect?

The exact answer to this question will depend on the model of pinpointer you have and what settings you are running (if your pinpointer has adjustable settings). But generally speaking, a pinpointer will not detect a target from more than two or three inches away.

The reason for this is that there’s a fine line that both manufacturers and users have to walk with regard to pinpointer depth. A pinpointer that isn’t sensitive enough will create a frustrating and fruitless experience for the user who can’t find the small target they’re trying to pinpoint. A pinpointer that is too sensitive will pick up on all sorts of items that are not your specific target and will also render the pinpointer essentially useless to a detectorist. Some manufacturers have made their pinpointers with adjustable sensitivity, allowing the user to determine what is best for them.

Can a pinpointer detect gold?

A pinpointer, like a metal detector, can detect any metal object, where it’s iron, gold, aluminum, or uranium. Pinpointers are frequently used by all kinds of detectorists, including hunters looking for gold rings and other jewelry, so a pinpointer can definitely detect gold! But as you’ll read in the next section, you wouldn’t want to go looking for gold with just your pinpointer.

Can you detect with just a pinpointer?

It is technically possible, but it would be an unpleasant and frustrating experience for several reasons. Firstly, a metal detector can be used from a standing position, but searching with a pinpointer alone would mean you would be down on your knees for your entire hunt. Not fun or comfortable. Secondly, pinpointers don’t discriminate, meaning you would have no idea whether your target was a gold ring, a quarter, or a rusty nail (far more likely!) until you pull it out of the hole. Thirdly, many modern detectors can detect a coin-sized target at up to a foot in ideal conditions, while a pinpointer just isn’t designed for that sort of depth. Anyone solely using a pinpointer is going to miss out on a world of targets more than a couple of inches below the surface. Finally, a metal detector is designed to be swung over a wide area, covering several square feet with every swing. A pinpointer can only detect a very small target area at any one time. It would take a person with a pinpointer several times as long to search an area when compared with a metal detector and they would do it much less thoroughly.

So while you could detect with just a pinpointer, save yourself the frustration and buy a detector first.

What is the best pinpointer to buy?

The best pinpointer for you will depend strongly on your budget and the features that you need for the sites that you detect. For example, if you detect on the beach even occasionally, you will want a waterproof, submersible detector. You may also want to choose a pinpointer with adjustable sensitivity. For a detailed consideration of the pinpointer models on the market and their pros and cons, check out our guide to the best pinpointers.

The Garrett ProPointer and its AT-designated successor have become fairly standard models in the detecting world (with good reason), but some may find the price a bit steep. Some competing and less expensive models are also available, but only a few models of decent quality, such as the Deteknix Xpointer, can be had new for less than $100.

Are cheap pinpointers any good?

There are many pinpointer models competing with the higher-priced models and many can be had for well under $50. Is it worth buying one with decent reviews on Amazon or similar?

This will of course depend on your budget, priorities, and your level of interest in metal detecting. For the novice who would like to try out the detecting experience with a pinpointer without investing much, a cheaper model might be worth picking up. For someone who is more seriously interested in the hobby, you would probably be better served by getting a higher-quality pinpointer made by a reputable manufacturer.

One should also be cautious of defective, deceptive, or fake pinpointers. Counterfeit Garrett pinpointers have popped up around the internet in recent years and it is not difficult to find cheap pinpointers with fake reviews meant to influence potential buyers. You may find it worth it to pick up a cheap pinpointer for more casual use, but do your homework before you buy.

Pinpointers are great time-saving devices for metal detectorists. Using a pinpointer will make target recovery faster, helping you to dig more targets in the time you have and reducing the frustration factor in retrieving small targets. But as I’ve explained above, a pinpointer is an auxiliary device for metal detecting and isn’t a replacement for a traditional detector – you would be much better off with just a detector than just a pinpointer! It’s strongly recommended that serious hobbyists buy a quality pinpointer from a reputable company, but those just getting into the hobby and not wanting to spend a bundle might opt for a less expensive model, but let the buyer beware. Whatever model you get, let your pinpointer help you spend less time retrieving targets, especially trash, and get more chances to get on the good stuff.

MetalDetectingintheUSA.com does not publish sponsored reviews; however we may earn a commission when you purchase something using one of our links. This includes, among others, the Amazon Associates Program for which, as an Amazon Associate, we earn from qualifying purchases. Our reviews are unbiased, and our opinions are our own.